More than just a viral story

The stories are heartwarming: A Detroit man who walked 21 miles roundtrip each day to get to his factory job was able to get a new car – and an apartment – after strangers who learned about him through news stories donated thousands of dollars.

A college employee’s boss donated paid time off so she could stay home with her newborn baby – part of a trend of co-workers donating vacation time to each other as baby shower gifts.

Many stories like these have gone viral, and it’s not hard to see why. These are displays of kindness, uplifting examples of people helping each other out in times of need.

Yet there’s also something troubling about these stories.

Why do new moms have to rely on time-off donations from coworkers to be able to spend time at home with their babies after giving birth?

Why was the man in Detroit unable to afford a car if he’s working fulltime?

Will these one-time acts of generosity leave them better able to weather other challenges in the future?

What about people who don’t have the benefit of such generous colleagues, or media attention that generates a groundswell of donations from strangers?

Thinking about – and trying to address – the root causes behind these kinds of situations is part of what we in the policy world refer to as “systems change.” It’s a wonky way of emphasizing the importance of crafting sustainable, broad solutions that can help more than one person at a time and address deeper problems.

It’s the kind of approach that leads us to ask: Does this situation reflect a broader issue? What is the root of the problem? What are the policy levers that could fix it?

At the Connecticut Health Foundation, this kind of thinking is critical to our work. When the foundation was created, the board recognized that it could put its funding toward direct medical care – and run out of money almost instantly. Instead, the foundation’s leaders set out to use both grantmaking and policy work to change the way things operate, and the systems that affect people, in a sustainable way.

Fifteen years ago, it was very hard for low-income adults and children in Connecticut to find a dentist to treat them. Medicaid paid dentists very low rates, and an abysmally low percentage of children and adults covered by Medicaid were receiving oral health care.

One option for solving the problem could have been to beg and cajole dentists to see Medicaid patients, or to provide grant dollars to pay dentists more money. The problem is, neither of those solutions would have changed the underlying system. They might be effective patches as long as they were in place, but nothing would have changed on a deeper level.

Instead, the foundation and a wide group of partners took a different approach. Greater Hartford Legal Aid and Connecticut Legal Services filed a lawsuit on behalf of children covered by Medicaid, resulting in a settlement that substantially raised the rates dentists were paid by Medicaid. The state Department of Social Services and the Connecticut State Dental Association worked hard to recruit dentists to treat Medicaid patients. The state streamlined the way it handled the administrative aspects of Medicaid, making it easier for dentists to participate. There was a lot of work done by health care providers in communities across the state to make sure dental care was available and accessible.

All that work paid off: By 2013, Connecticut led the nation in the percentage of children covered by Medicaid who visited a dentist in the previous year. Children were more than twice as likely to get dental care than they had been in 2005.

Even one of the recent heartwarming stories offers a glimpse at how taking a systems change approach can benefit many people.

The Detroit Free Press first wrote about James Robertson in 2015, reporting that the 56-year-old walked 10.5 miles each way to and from his job as an injection molder at a factory, where he was paid $10.55 per hour. In more than a decade at the same company, he never missed a day of work, despite having no vehicle since his 1988 Honda broke down and he decided he couldn’t afford to buy, maintain, and insure a car. He caught a bus for a small stretch of his daily commute, but most of his trip happened on foot because the route wasn’t covered by public transportation. 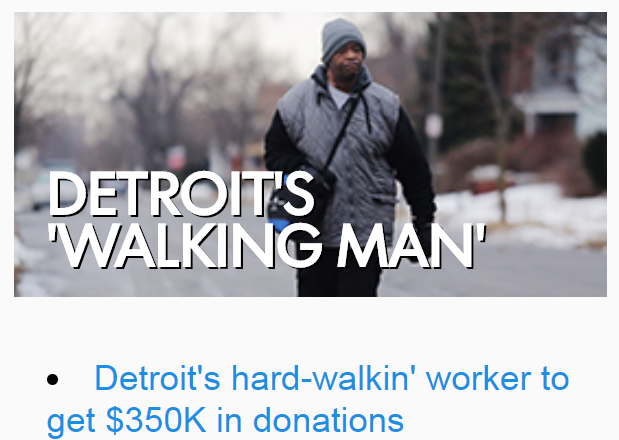 The first story about Robertson drew national attention, and strangers donated more than $350,000. He got a car and an apartment in a new neighborhood.

Yet the story might have also helped others in a more lasting way, according to the Free Press. The news coverage focused attention on the public transportation challenges Robertson faced, particularly the gaps between the separate bus systems run by Detroit and the suburban area where Robertson worked.

Advocates already working to broaden bus service recruited Robertson to their cause. He testified in favor of expanding transportation services in his area so buses would run 24 hours a day. Two months later, the Free Press reported, the Detroit Department of Transportation began 24-hour bus service on certain routes and bolstered the schedules of other routes in the city and a neighboring suburb.

“The overnight fame sprung a year ago on James Robertson brought ‘the Walking Man’ relief from 10 hours a day of combined bus riding and trudging to work,” Free Press reporter Bill Laitner – whose coverage emphasized the broader transportation issues raised by Robertson’s story – wrote in 2016. “But did it help anyone else? There’s evidence that it did.”

You can learn more about the systems the Connecticut Health Foundation aims to change, and how we think about systems change, by visiting our website.