Today’s post is written by Patricia Baker, president and CEO of the Connecticut Health Foundation.

W. H Auden’s poem captures how so many of us felt upon hearing of Henry (Hank) Parker’s passing.

I came to know him later in his life as one of the founding and guiding members of the board of the Connecticut Health Foundation.

When he joined the foundation board, his many accomplishments as well as some of the challenges he faced were well known. He was:

I cannot let Hank’s passing go without remembering and appreciating his contribution to the Connecticut Health Foundation and to me. In the late 1990s, as this new health care conversion foundation came to life, one of the first board members to join this dream – this promise of change – was Hank. He was recognized as an expert who could help us develop our investment strategy. What we didn’t realize was how central he would be in shaping the values of the foundation as well as the full launch of the foundation. 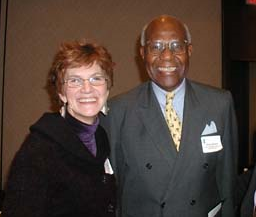 When the foundation first started, we held the equity of the company ConnectiCare, but not cash. Our modest giving was a function of carrying out the company’s grantmaking. When the executives at Connecticare brought an offer to sell a minority stake in the company to private investors, the board reviewed all the pros and cons of such an investment at a special board meeting. It was Hank who stopped the discussion by suggesting not that we sell a portion of our equity but to sell all the equity in the company and create an endowment so we could get about doing the business of the foundation – helping to improve the lives of Connecticut residents. This option had not been considered. It was his voice and clarity of conviction that helped to accelerate the course of the Connecticut Health Foundation and our contribution to the health and well-being of Connecticut’s residents.

As we drill down in our new strategic plan, which includes a new focus on connecting clinical care with the communities where people live and the non-clinical factors that affect people’s well-being, I can’t help but hear Hank’s voice sharing his experience as the program director of New Haven’s Winchester Community School – a school that was so much more than an educational institution. Rather, it was the heart of a neighborhood, caring for the children who attended Winchester and their families, including their health and well-being. It was that deep understanding of the need for connectedness between sectors and people that Hank brought to the board in addition to his financial acumen.

Hank understood and honored our differences and was willing to listen to understand rather than wait to give a speech. He embodied the concepts he came to promote at the foundation – cultural and linguistic competency and cultural humility.

A man of grace, eloquence, and humor, we are all better because he shared his life with us. I miss him.

Put crepe bows round the white necks of the public doves,