“We have to make sure people use their voice”: PT Partners builds community in Bridgeport

For residents of the PT Barnum Apartments in Bridgeport, the sewage treatment plant next door has been a frequent source of problems. The local Water Pollution Control Authority, or WPCA, which oversees the plant, has been trying to expand the plant even closer to the apartment complex – and residents say their voice has been left out of considering it.

“In a community meeting with the WPCA, they talked about businesses, the rest of the Black Rock neighborhood who’s not right next door, and the animal life, the marine life, even the rodents,” said Tamsyn Ambler. “They didn’t once say PT Barnum. There was a map open, and they didn’t even acknowledge that there’s a community right there.”

“It was like the lives of animals mattered more than ours,” Dione Dwyer, a resident at PT Barnum, added.

Ambler and Dwyer are members of PT Partners, a grassroots, resident-led organization that was founded in 2014. The organization seeks to foster a PT Barnum community that works together, where residents serve as leaders in fighting injustice and changing the systems that impact their lives and community. Residents of PT Barnum are working to make sure they have a seat at the table at meetings and that resident voices are acknowledged.

PT Partners works on a wide range of issues, such as organizing to get the local housing authority to address mold, trash maintenance, parking, and mailbox access. Nine members serve as resident leaders and work on special projects to support PT Partners and inform the direction of the group’s organizing and advocacy; eight others serve as building captains and act as a main point of contact between their neighbors and the larger community. They serve on coalitions and task forces, including Unrig Bridgeport, the Bridgeport Anti-Racism Collective, Black Rock Neighborhood Revitalization Zone, and the Bridgeport Energy Partnership.

PT Barnum Apartments has over 300 units; 90% of residents are single mothers. Half of the residents identify as Black and 60% identify as Latinx (some residents identify as both). PT Barnum conducts its organizing work from a Black feminist lens, meaning that they consider how racism and gender inequality intersect with one another and shape the lives of residents. The group’s Anti-Oppression Task Force is a resident-led initiative that began in 2018 to examine how policies impact the safety, quality of life, and voice of residents.

As a grantee of the Connecticut Health Foundation’s Patricia Baker Awards for Health Equity Policy and Advocacy, PT Partners is working on an advocacy campaign for residents to have a central voice in the WPCA expansion. The effort builds off important history: In 1970, 8-year-old Gary Crooks fell into a WPCA settling tank and died. Community members sought justice for the boy’s death. Over 800 area residents protested further construction of the WPCA sewage plant. A community center built after the protests was named for Gary Crooks.

The founders of PT Partners found inspiration in this work. “History is important, and we can’t ignore it,” said Vanessa Liles, project director for PT Partners. “So, we said, ‘Let’s work with the WPCA to find solutions that will work for the community, and in turn, will work for everyone else.’”

In addition to the safety and environmental issues that residents face, meeting basic needs is a regular challenge.

“It’s difficult trying to do environmental justice education because residents are dealing with so much – food insecurity, things for their literal survival,” said Juliemar Ortiz, environmental advocacy fellow for PT Partners. “When it comes to things like the smell, or other things that aren’t always in their face every single day, it’s difficult to get them to be invested because of the issues they’re already facing.”

But for PT Partners, giving up is not an option.

“What I’ve learned is persistence is key,” said Dwyer, who has been with the organization since its inception.

“I learned we have to be resilient because justice won’t happen overnight,” Resident Leader Shaurice Bacon added.

To help meet immediate needs, PT Partners formed a “Sunshine Club.” Residents contribute $2 a month and can receive things like food, clothing, and cleaning supplies. “They can give us a call or just show up, and we give them what they need,” said Evelyn Medina, a former PT resident and member of the executive committee and task force. 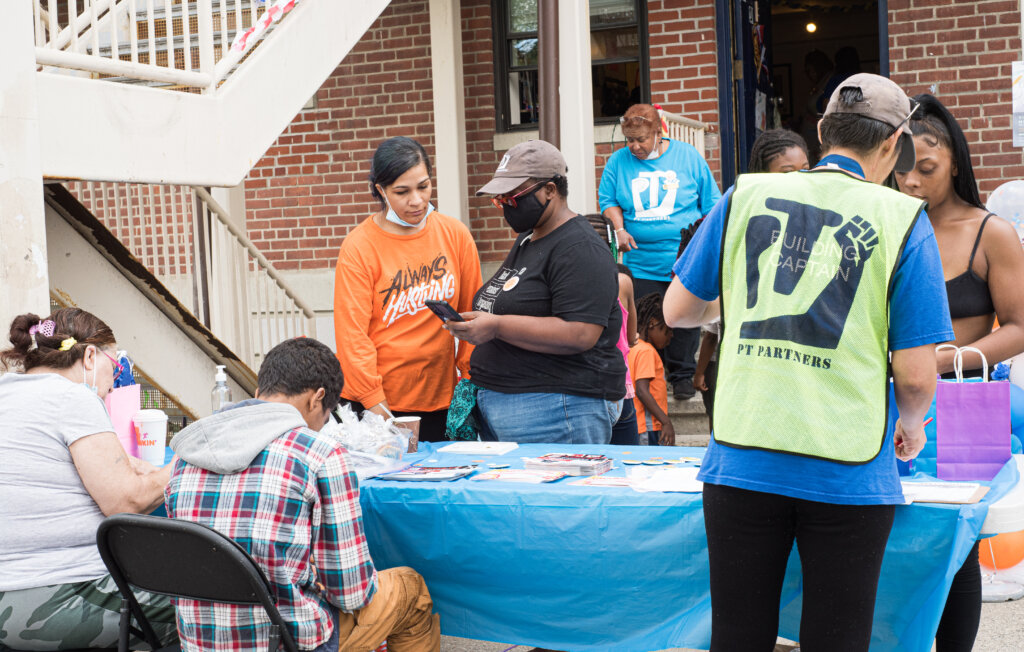 Helping meet residents’ needs is also a way to deepen relationships. Ortiz meets them at the mobile food truck that visits the apartments; she uses it as an opportunity to introduce herself, talk about the environmental justice work PT Partners does, and hear their concerns.

Such relationships are often at the heart of community organizing, and PT Partners designs its programming with relationship-building in mind, including hosting events. The group’s annual “PT Awards Day” is a time to celebrate residents for their contributions to the community. The group also puts on an annual Mother’s Day event that allows residents to connect with one another, building a sense of community.

Liles said COVID-19 showed PT Partners’ ability to connect with residents. “We didn’t have to get ready to respond – we were already there,” she said.

At the start of the pandemic, PT Partners posted a survey on every resident’s door. More than 200 provided responses. “COVID-19 affected everybody negatively, but it allowed us to do what we’ve always been ready to do,” Liles said. “We were there to save us.” Liles added PT Partners helped distribute resources to residents that others secured.

PT Partners has expanded to other low-income housing developments in Bridgeport, and leaders hope to see the model replicated beyond Bridgeport.

“We have to make sure people use their voice. They’re tired of failed government and being dismissed,” said Yolanda Stinson, a resident and environmental advocacy fellow. “I want everyone to be like me. I let people know that this isn’t just about me, it’s about my daughter, my grandkids. What I say matters.”