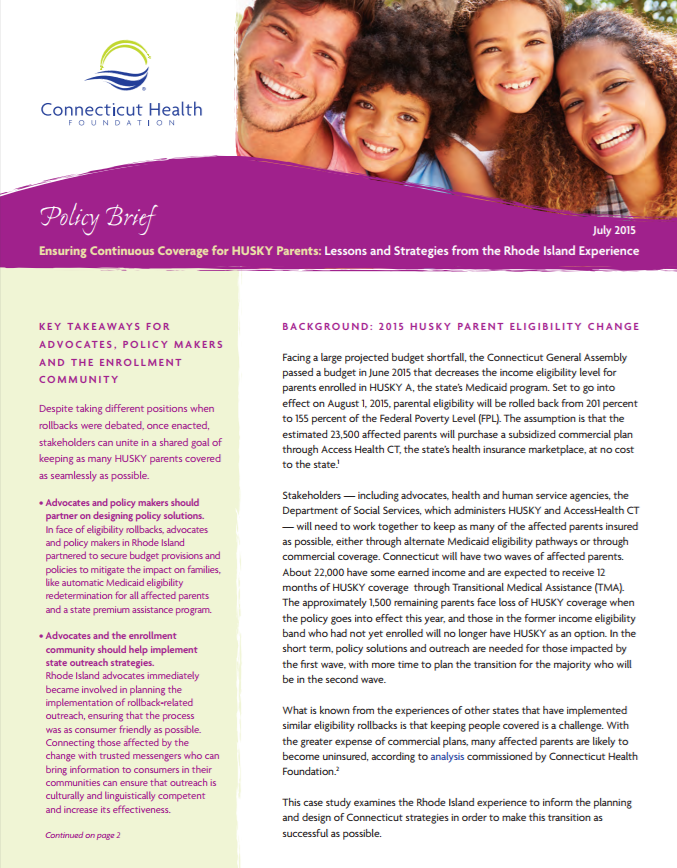 Facing a large projected budget shortfall, the Connecticut General Assembly passed a budget in June 2015 that decreases the income eligibility level for parents enrolled in HUSKY A, the state’s Medicaid program.

Parental eligibility will be rolled back from 201 percent to 155 percent of the Federal Poverty Level. The assumption is that the estimated 23,500 affected parents will purchase a subsidized commercial plan through Access Health CT, the state’s health insurance marketplace.

Connecticut will have two waves of affected parents. About 22,000 have some earned income and are expected to receive 12 months of HUSKY coverage through Transitional Medical Assistance. The approximately 1,500 remaining parents face loss of HUSKY coverage when the policy goes into effect August 1, 2015, and those in the former income eligibility band who had not yet enrolled will no longer have HUSKY as an option.

Despite taking different positions when rollbacks were debated during state budget negotiations, Connecticut stakeholders (i.e., the HUSKY program, Access Health CT, advocates, service providers, policy makers) can unite in a shared goal of keeping as many HUSKY parents covered as seamlessly as possible.

What is known from the experiences of other states that have implemented similar eligibility rollbacks is that keeping people covered is a challenge. With the purpose of informing Connecticut’s efforts to mitigate coverage churn, this case study features outcomes, lessons, and strategies from Rhode Island, which implemented a Medicaid eligibility change for parents in 2014.