Today’s blog post comes from Dr. Shreya Kangovi, Founding Executive Director, Penn Center for CHWs, and Claire Qureshi, Vice President, Frontline Delivery, Office of the UN Secretary-General’s Special Envoy for Health and highlights the commonalities of CHWs across contexts and the need for more work here in the U.S. on community health.

Each day, Agnes serves her community in Liberia, supporting pregnant mothers during the final days before their deliveries, identifying cases of pneumonia and malaria among young children, and educating families about HIV, TB, and neglected tropical disease. Agnes is a community health worker (CHW) for Last Mile Health, operating in one of the most remote stretches of Grand Gedeh County in Liberia. She was also on the ‘frontlines’ during the Ebola epidemic, supporting case finding and detection. She’s now on the lookout for re-emergences of the deadly disease as well.

For Agnes and her fellow citizens, the stakes are very real: Liberia has an under 5 mortality rate of approximately 67 per 1,000 live births (compared to 38 in a country like Rwanda and 6.5 in the U.S.).[1] While the government of Liberia — together with development partners like the World Bank and NGOs like Last Mile Health — have made tremendous progress in rebuilding Liberia’s health system after decades of civil war and the Ebola epidemic (which left 11,000 dead across West Africa), millions in the country still lack access to quality primary care.

Five thousand miles away, Cheryl walks Philadelphia’s neighborhoods as a CHW for the Penn Center’s IMPaCT. She stops at an abandoned store front to bring water to a man living there during a 98 degree heat wave. He’s just been released from jail and had nowhere else to stay. She rushes to meet another young woman — developmentally delayed and HIV-positive from an abusive caregiver — to take her to a doctor’s appointment. 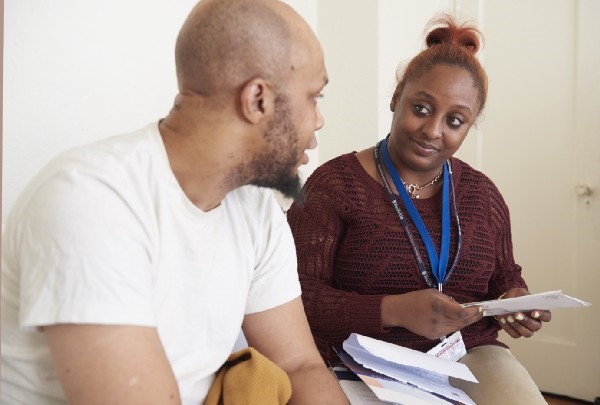 More than a quarter of Philadelphia residents live in poverty –the highest rate among large cities in the United States. Philadelphia also has the highest incarceration rate in the country. On the ground, this means neighborhoods without safe parks or fresh produce, and families devoid of men. These realities kill more Philadelphians each year than the 5,000 lost in Liberia to Ebola. According to city of Philadelphia health assessment, diseases that disproportionately affect poor families (premature cardiovascular disease, smoking, homicide, suicide, and opiate addictions) claim approximately 7,000 lives among minority and low income people

every year. And they require a different approach. CHWs like Cheryl help patients with a different kind of basic human need than the medical care CHWs provide in Liberia, She provides empathy, social support, advocacy and connections to health and social services.

What unites Agnes and Cheryl — resilient and powerful women on opposite sides of the Atlantic — beyond the fact that they both work both work for community health programs that are providing crucial health support to communities?

Three key points: where they come from, what they want for their communities, and what they need to be successful.

And when you ask Agnes and Cheryl, they will affirm that they need to be trained, supported, and integrated with the broader health and social services system — common threads across thousands of miles.

Globally, many partners, from the World Health Organization (WHO) to UNICEF to the African Union, from Partners in Health to Save the Children, are actively working to promote and sustain the important role of CHWs, given their crucial contribution to achieving Universal Health Coverage and the broader basket of Sustainable Development Goals linked to health (SDG 3). In October the WHO will issue new guidance on CHW programs[4] a move that will strengthen the efforts of countries across Africa that have already endorsed the African Union resolution to recruit and train two million CHWs in Africa. [5]

Organizations and countries have also recognized the economic return from community health workers — in 2015, the World Bank, UNICEF, the Office of the UN Special Envoy, Last Health, Partners in Health, and Total Impact Capital with other organizations issued a report that found a 10:1 return from community health workers, thanks to the productivity gains from keeping people alive, the fiscal stimulus from increased employment, and the economic benefit of preventing GDP-crushing pandemics like Ebola and flu.[6]

Here in the U.S., we are just getting started. While there are a plethora of programs — many linked to the early days of the community health center movement in the 1960’s — there are few standards on what CHWs should do or how they should be incentivized, little sharing of best practices between programs, and only emerging work to link grant-funded to value-based funding approaches. Penn Center’s IMPaCT has made rigorous evaluation of its program a priority and we are proud of our results — from improved mental health, chronic disease control and access to primary care, to a 30% reduction in hospitalizations. It’s time more programs in the U.S. learn from approaches like that of the Penn Center as well as from global programs like UNICEF, the governments of Ethiopia or Liberia, and organizations like Last Mile Health, Living Goods, Muso, Partners in Health, Integrate Health, and Possible, which issued the CHW Impact Report.

It’s also time that we start connecting the Cheryls and Agneses of the world to each other, forming global networks of community health workers and global collaboratives focused on expanding community health out from the clinic level. Working on the frontlines in medically underserved settings can feel lonely and remote — these CHWs, and thousands more like them, may appreciate knowing their kindred spirits around the globe.

The lessons and motivation we can draw across contexts are considerable and essential to achieving the SDG goals on health — goals that apply to the United States as much as they apply to Liberia. The Penn Center for CHWs and the Office of the UN Special Envoy — together with other partners, funders, and donors — are committed to expanding community health in the U.S. and are starting a funder’s learning network to do more. If you’re interested, contact Shreya Kangovi (kangovi@mail.med.upenn.edu) or Claire Qureshi (cqureshi@healthenvoy.org) to learn more.