This blog post is by Patricia Baker, the Connecticut Health Foundation’s founding president and CEO. Before leading the foundation, Pat served as CEO of Planned Parenthood of Connecticut for nine years. 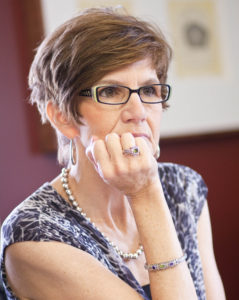 I experienced my teens and early twenties before Roe v. Wade. I grew up in a small farm town where when a young woman became pregnant, either she suddenly dropped out of school and might marry, or she went to visit “Aunt Rose” for several months before we saw her again.

In college, a new reality hit me: abortion as a choice, but a very dangerous one, and one that at times left one scarred, or worse – dead. Some women with means and knowledge ended up in New York, which had legalized abortion, but none of my friends had either the means or the knowledge to seek the New York solution.

In 1973, with Roe v. Wade, reproductive choice became a reality. Gaining this right made a dramatic difference in women’s lives and health.

Unfortunately, in the years that followed, new restrictions made it more difficult to access reproductive health care. As was the case before Roe v. Wade, those with the economic resources to pay for an abortion had choices and some control over their health and well-being. The women who already faced the greatest challenges – including low-income women, a group that disproportionately includes women of color, and those in rural areas – were most disadvantaged.

The 1976 Hyde Amendment barred federal funds from paying for abortion, except to save the life of the woman. Medicaid, the health care payer for low-income women, eliminated abortion as a covered service.

Since then, efforts to restrict abortion continued, resulting in the closure of clinics. Today, nearly 90% of counties in the U.S. have no abortion clinics. This lack of access to care is a major factor in racial and ethnic health disparities.

The U.S. Supreme Court’s ruling today to overturn Roe v. Wade will make a bad and inequitable situation even worse, eliminating a right that women have had for nearly 50 years.

One in four women will get an abortion in their lifetimes. Low-income women are more likely to seek abortions. Black and Latina women make up more than 50% of those receiving abortions; this is in part a product of the racial inequities already present in our health care system – less access to health care providers, insurance, and contraception.

This court decision will only exacerbate these disparities. According to the Centers for Disease Control and Prevention, infant mortality rates for Black babies is more than twice as high as the rate for white babies. Black women are 2½ times more likely to die of pregnancy-related complications as white women and experience higher rates of low birthweight and preterm deliveries. What will these numbers be when those facing an unintended pregnancy can no longer access the full range of reproductive health care services?

The Supreme Court’s ruling eliminates the protection of the right to abortion, leaving it to the states. Twenty-six states stand ready to ban abortion or make it nearly impossible to access, according to the Guttmacher Institute. Geography, economic means, and politics will determine the health care choices available to women.

We are fortunate in Connecticut to have a long history of state-level protections for access to reproductive health care, but this right should not depend on where you live.

Women’s health, well-being, and futures are at stake. Abortion is a safe medical procedure and, like all health care choices, is one that is best made by a woman and her provider. Do women not have a right to personal bodily autonomy? If they do, how can we ensure that all who need and choose abortion have access, not just those living in a select few states?

Having worked for Planned Parenthood of Wisconsin and Connecticut, I witnessed women and girls face an unintended pregnancy who were victims of incest, rape, domestic violence, as well as women facing tragic choices due to fetal illnesses, and those with an unintended pregnancy. None of these women made their decisions lightly.

The former Supreme Court Justice Ruth Bader Ginsberg had it right when she said, “The state controlling a woman would mean denying her full autonomy and full equality.” This Supreme Court decision will play a major structural force in exacerbating health inequity for women.